Newly married, with a son each about the same age, our clients wanted a home that would provide a semi-open living area for the newly blended family, but separate and private bedrooms for each boy that could be converted into other uses when the boys went to college.

This unique home also needed to accommodate Stephen, a well known journalistic and art photographer. He needed a studio with a unique requirement, a 12’ ceiling where an overhead camera could be mounted to take photographs of clients’ artwork mounted on a table below. He also needed a good sized darkroom which ended up in an attached bunker extended into the hillside behind the house. The lot they had purchased was almost impossibly steep to build on, but it afforded beautiful long range views to the east across the Connecticut River Valley to the Pelham Hills. Access to the house site was from below requiring a steep driveway to a 3 car garage in the basement level. The couple also had strong ties to Martha’s Vineyard and wanted to somehow evoke a sense of connection to seaside cottages.

Given the steep hillside, we perched this neo arts & Crafts, 2,700 square foot home up the slope to maximize dramatic views of Massachusetts’ Holyoke Range and the Pelham Hills across the Connecticut River Valley. We played against the verticality of the site with strong horizontal elements of the house, energizing the dramatic diagonal entry stair that clearly marks the house entry.

The stairs lead up from the driveway to the main living level 13 feet above where an open living area is wrapped by a three-season porch. Two bedrooms and a bathroom for the teenage children are housed in a small wing, while a large master suite with its own porch is nestled into the roof. Throughout the house, softly white-washed wood paneling was selected to impart a calm zen-like peacefulness.

We began with recognizing that we had a case where adversity was actually an advantage. A small level area halfway up the slope was large enough for a minimal parking area and garage entrance. The slope continued up for another 14 or 15 feet to another level area that would provide an ample and private back yard. This meant that the main living area would be 14’ above the lower level, just the right height to accommodate the necessary ceiling height for Stephen’s studio below. The tall stairs connecting the two levels promised plenty of daily exercise!

The sons’ bedrooms near the front door would later become a guest room and home office. By any measure, Elizabeth is a zealous master chef. She didn’t require a large kitchen, but one fastidiously laid out. An enormous antique hutch that she brought with her provides most of the storage, with the appliances arranged tightly around the prep area. An exterior door leads to the three season porch oriented towards the view, with the otherside of the kitchen open to the ample dining area occupied by a large dining table for the many friends and family that they regularly entertain. The living room beyond is the designated quiet space open to the private back yard.

The next level up houses the master suite replete with an exercise room. The east facing bedroom opens to a protected balcony with the best views anywhere in the house.

The arrangement of the garages below evoked turn of the century boathouses along our regional shorelines. We treated the white cedar shingle and white pine with bleaching oil, customary to seaside buildings, that is a light taupe, but weathers to a uniform grey.

The light taupe extended into the house where most of the walls and ceilings of white pine boards were treated with a light umber tinted whitewash. The enveloping warm wood is soothing and imbues the house with a Zen calm throughout.

We had several design challenges:

Despite the challenges this project posed, it came in very close to the schedule and budget, mostly because the clients, builder, and architect for a strong, affirming project team. Fifteen years later, the Petegorsky’s still live there and couldn’t imagine living anywhere else. To this day they still get compliments on their home on the hill, though now more tucked away by the young woods that has grown up in the intervening years. 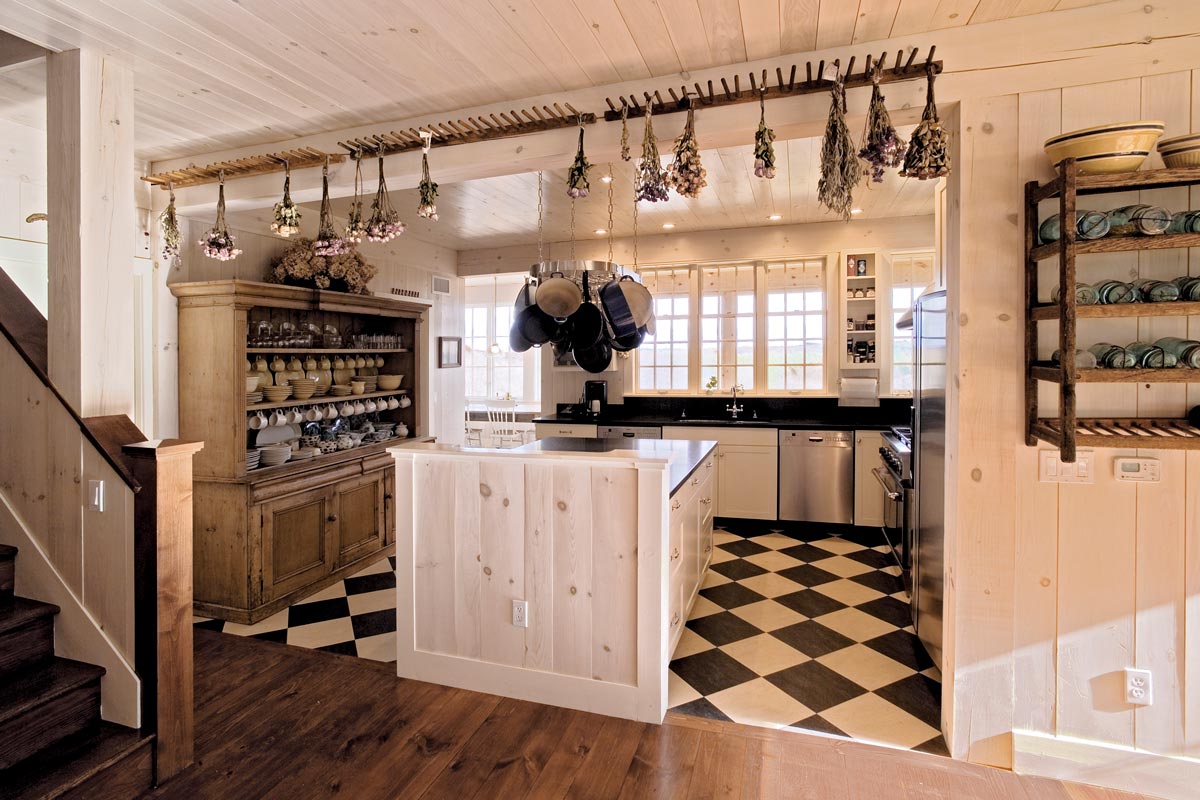 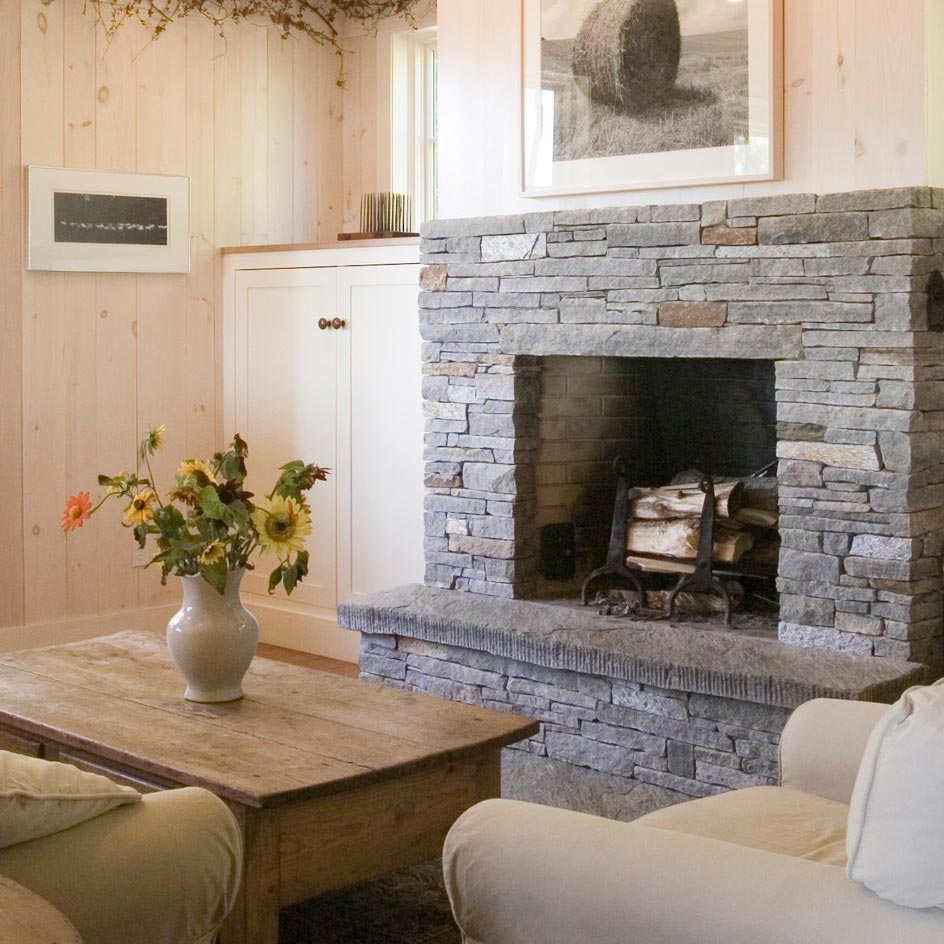 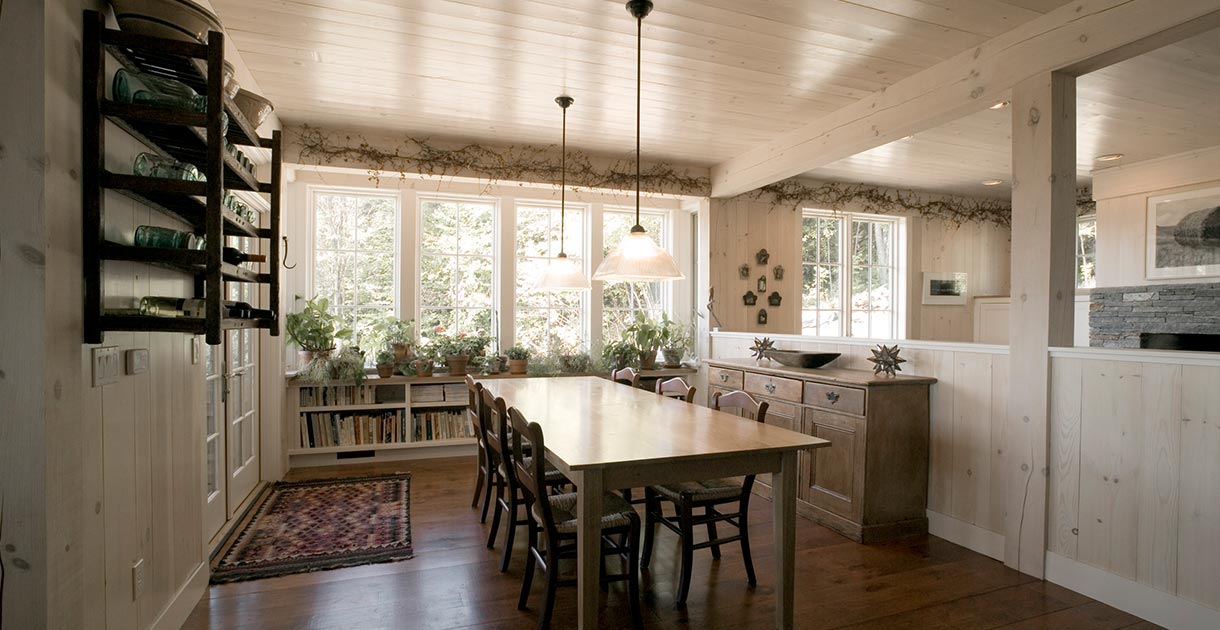 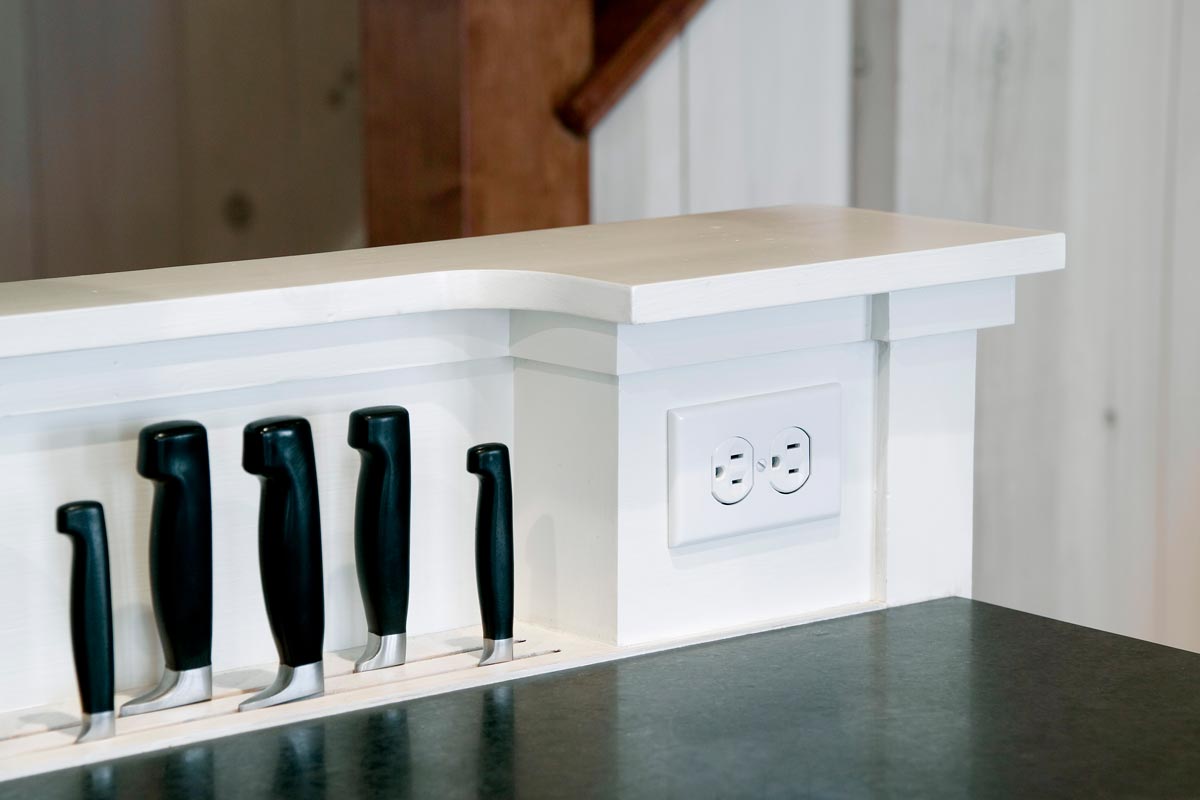 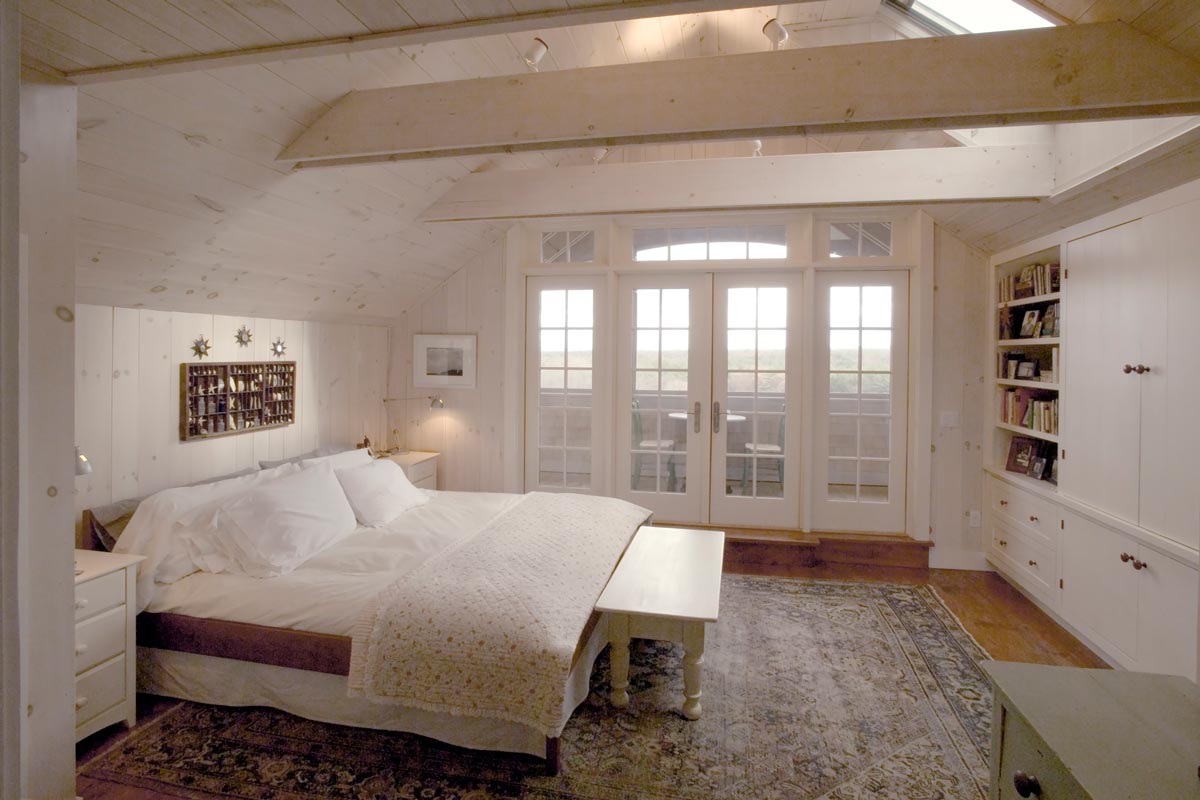 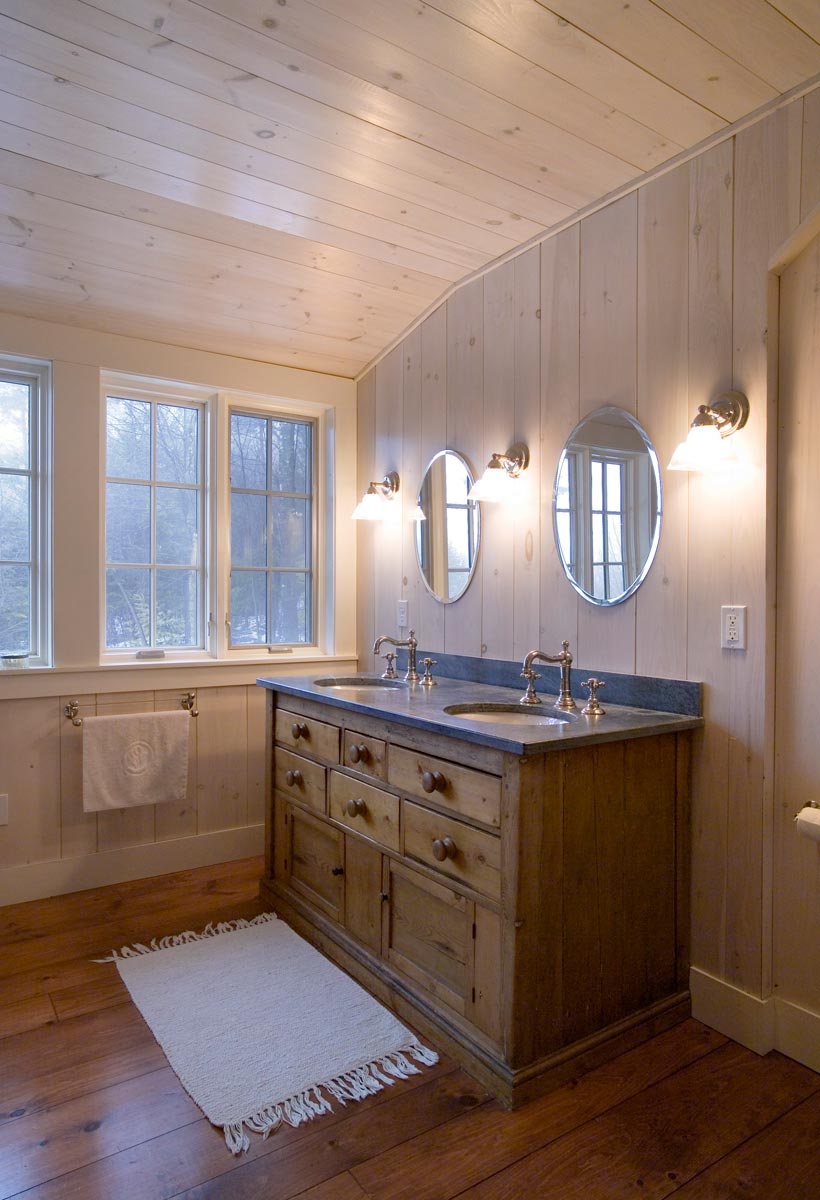 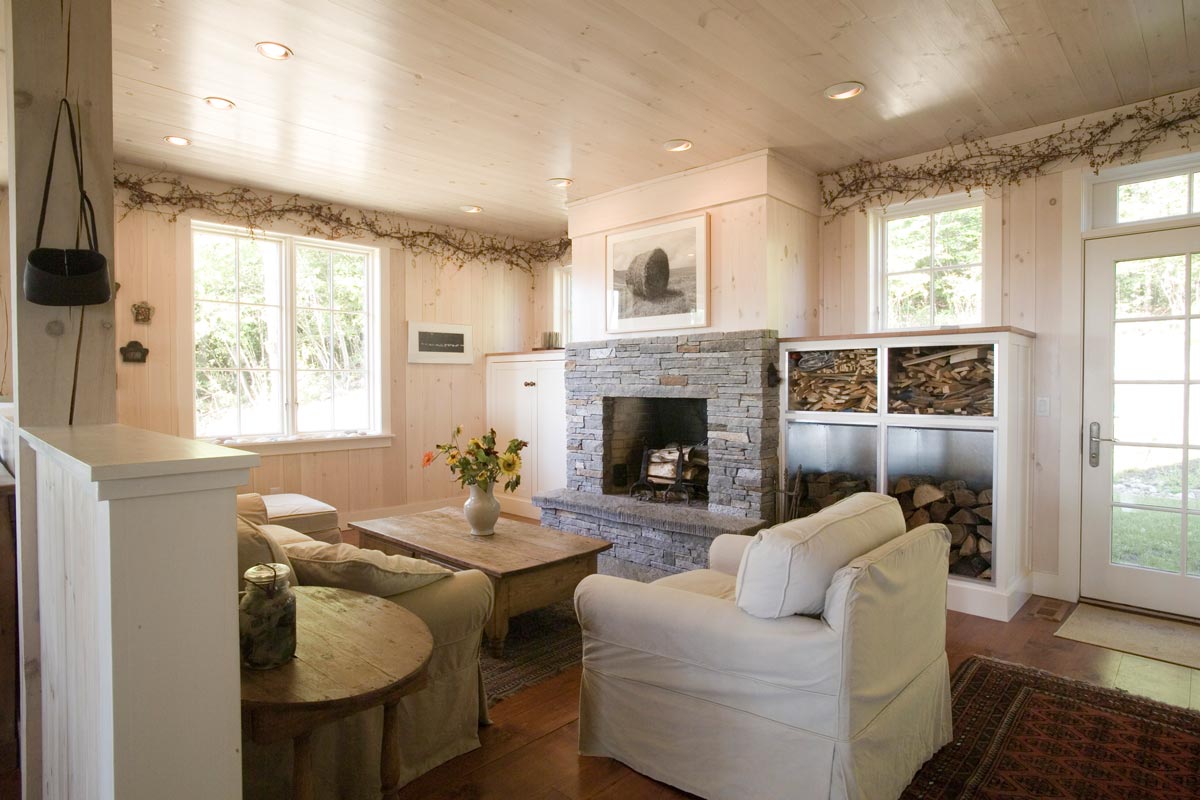 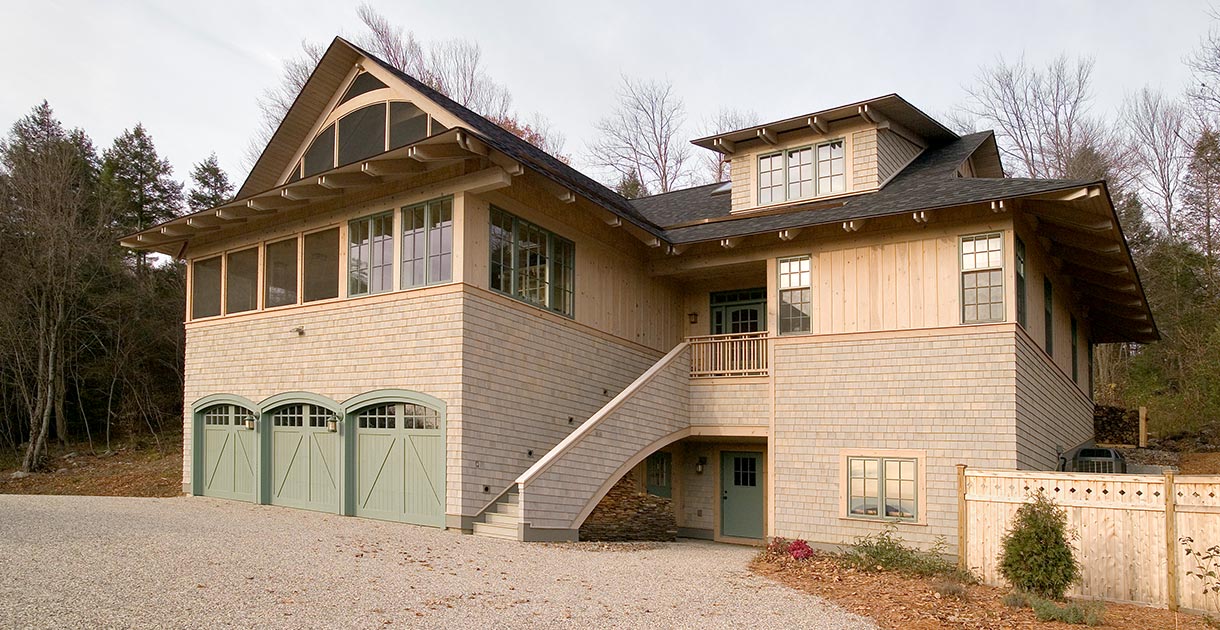